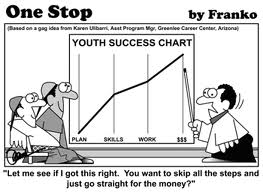 We pray today, Father, that our children and grandchildren would have a strong motivation to work.  May they understand that idleness and laziness lead to hunger, want and poverty.  Yes, you are their source and provider, but help them understand that you are the source and provider of their work opportunities.  You do not specialize in giving free handouts to those who choose to stay home, sleep and watch TV.  Work is normal.  Work is expected.  You called us to be fruitful.

Proverbs 12:11 A hard worker has plenty of food, but a person who chases fantasies has no sense.

Proverbs 13:4 Lazy people want much but get little, but those who work hard will prosper.

Proverbs 20:4 Those too lazy to plow in the right season will have no food at the harvest.

Proverbs 28:19 A hard worker has plenty of food, but a person who chases fantasies ends up in poverty.

At their jobs, Father, empower them to be productive employees who garner favor with their bosses.  Teach them how to take care of their bosses, blessing those supervisors rather than irritating them.  Let the work of their hands prosper under your blessing.  If appropriate, equip them to be leaders among their co-workers. May they find fulfillment, freedom and promotion at their jobs.  We don’t want to see them become slaves to poverty and the welfare system.

Proverbs 10:26 Lazy people irritate their employers, like vinegar to the teeth or smoke in the eyes.

EXCUSES FOR NOT WORKING—IF ONLY I HAD…, FEAR OF…

Proverbs 12:27 Lazy people don’t even cook the game they catch, but the diligent make use of everything they find.

Proverbs 22:13 The lazy person claims, “There’s a lion out there! If I go outside, I might be killed!”

At work, make them diligent and persevering, doing their best at all times, not looking for shortcuts or making excuses.  May they finish what they start.  May they make use of what they have and not complain about what they do not have.  Let fear be under their feet.  When the challenges of their jobs make them want to quit, grant them courage to face the “lions.”  When they are tempted to play it safe, show them how to be wise risk-takers.

Proverbs 6:9 But you, lazybones, how long will you sleep? When will you wake up?

Proverbs 15:19 A lazy person’s way is blocked with briers, but the path of the upright is an open highway.

Proverbs 18:9 A lazy person is as bad as someone who destroys things.

Proverbs 6:6 Take a lesson from the ants, you lazybones. Learn from their ways and become wise!

Finally, Father, when the urge arises for them to become lazy, show us how to appropriately warn them.  Send others to them who will also warn and encourage them.  May they take a lesson from the ants and learn from other hard workers in their lives that honorable, honest work reflects wisdom and character.

Thank you, Father, that our children and grandchildren responsibily respond to your call that we be fruitful in our work.  And as they work, fill them with your Holy Spirit.  May they not rely upon their own strength alone, but may you be the strength of their lives.  In Jesus’ precious Name, Amen! 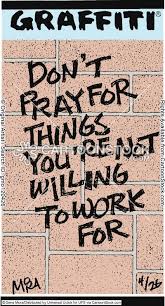 OTHER RELATED PROVERBS  (All scripture links take you to www.biblegateway.com.)

Proverbs 19:24 Lazy people take food in their hand but don’t even lift it to their mouth.

Proverbs 21:25 Despite their desires, the lazy will come to ruin, for their hands refuse to work

Proverbs 24:30 I walked by the field of a lazy person, the vineyard of one with no common sense.

Proverbs 26:14 As a door swings back and forth on its hinges, so the lazy person turns over in bed.

Proverbs 26:15 Lazy people take food in their hand but don’t even lift it to their mouth.